Hepatitis B virus (HBV), Hepatitis C virus (HCV), human immunodeficiency virus (HIV) and dengue virus collectively cause more than 440 million new infections each year. This is in addition to the 650 million people chronically infected with these viruses worldwide. Our group is developing antiviral therapies to combat these and other viruses such as Ebola and influenza.

We are focusing in particular on interfering with the morphogenesis of HCV and HIV, on the host cytokine response to dengue virus infection, the structural biology of viral proteins as well as host cell proteins needed for the formation of infectious viruses, and the development of a mass spectrometry-based less-invasive diagnostic test for early stages of liver fibrosis, caused by HCV and other liver diseases.

We have a number of national and international, academic, medical and industry partners. Members of the group are involved in a variety of interdisciplinary projects using amongst others proteomics, mass spectrometry, lipidomics, phage display, x-ray crystallography, electron microscopy (EM), nuclear magnetic resonance (NMR), electrophysiological techniques, organic and medicinal chemistry, atomistic computer modelling, and of course, growing and killing viruses in vitro and in vivo. 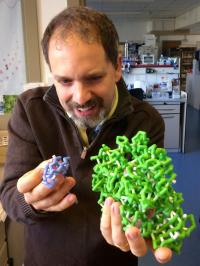 Dr Roversi delving into the structure of ER alpha-glucosidase II